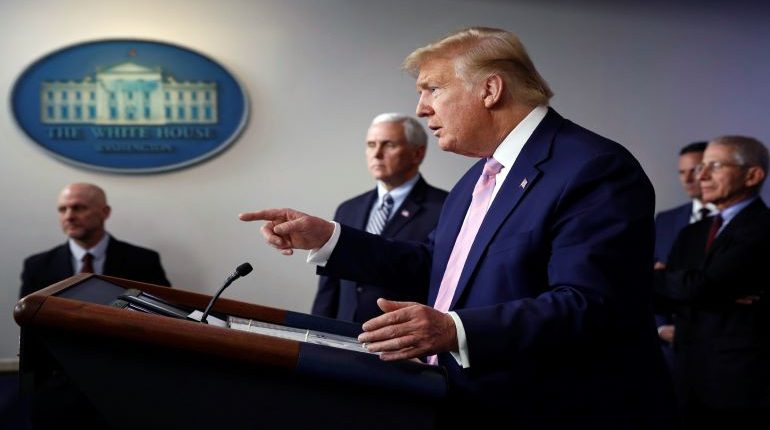 President Donald Trump wants to partially reopen the U.S. economy within four to eight weeks, but the Covid-19 outbreak is still showing only patchy signs of slowing down, as the number of U.S. cases doubled over the last week to 400,000. Bond spreads widened after another acrimonious meeting at which Germany and others refused to issue debt jointly with weaker eurozone members. Oil prices continued to vacillate ahead of the OPEC+ meeting on Thursday, and China finally lifted the lockdown of Wuhan, where the virus first emerged. Here’s what you need to know in financial markets on Wednesday, April 8th.

U.S. President Donald Trump talked up the possibility of reopening parts of the U.S. economy, as the Covid-19 outbreak in the country showed mixed signs of slowing down. The number of U.S. cases has doubled to 400,000 in the last week, but grew only 8.1% on Tuesday, a fifth straight daily decline.

Trump’s top economic advisor Larry Kudlow told Fox earlier that parts of the economy may reopen within four to eight weeks, although it isn’t clear what degree of support the plans could count on among governors and mayors across the country.

Trump’s comments came after another press conference plagued by mixed messaging, in which he first announced, then walked back, a suspension of U.S. contributions to the World Health Organization. The president had criticized the WHO earlier for its “China centric” communication, implying that it helped the Chinese government cover up the true scale of the Covid-19 disaster.

European sovereign bond spreads widened to the most in three weeks after eurozone finance ministers again failed to agree on how to fund the currency union’s fiscal response to the Covid-19 crisis. The meeting was suspended until Thursday, after talks broke down over demands – led by Italy, Spain and France – for joint debt issuance, known as ‘coronabonds’.

German Finance Minister Olaf Scholz, one of those opposed to coronabonds, told reporters nonetheless that a deal is near.

The news came amid clear evidence of the recession hitting Europe. The Bank of France estimated that French GDP shrank by some 6% in the first quarter, while Germany’s leading economic research institutes forecast that German GDP will shrink by 9.8% in the second quarter, after a 1.9% contraction in the first three months of the year.

The virus, meanwhile, claimed its highest number of victims in Spain in four days, frustrating hopes for a clearer sign of peaking.

U.S. stock markets are set to open mostly higher after a two-day rally ran out of steam in late trading on Tuesday to leave benchmark indices marginally lower on the day.

The dollar index was 0.2% higher at 100.14, thanks largely to gains against the euro after the Eurogroup’s failure and the alarming GDP headlines from France and Germany.  European stock markets were also mostly lower, with the Stoxx 600 falling 1.1%.

4. Oil prices perk up on fresh hope ahead of OPEC+ meeting

Oil prices stayed volatile a day ahead of the OPEC+ meeting at which Russia, Saudi Arabia and others are aiming to agree a cut of around 10 million barrels a day in output.  U.S. crude futures were up 3.6% at $24.48 a barrel while Brent futures were up 0.6% at $32.05.

Crude futures had tumbled late on Tuesday amid pessimism that even a 10 million barrel-a-day cut would not fix an oversupply problem, given that global demand has fallen by even more.

The U.S. government’s weekly report on oil stocks is due at 10:30 AM ET and is likely to corroborate – broadly – another huge rise in stocks reported on Tuesday by the American Petroleum Institute. The 11.9 million barrel rise reported by the API was above market forecast for a 9.3 million barrel increase in official stocks.

Separately on Tuesday, the Energy Information Administration cut its forecast for U.S. oil output by 1.2 million barrels a day for 2020, and by 1.6 million barrels a day for 2021. The U.S. government will likely argue that the projections are proof that it is sharing the burden of output discipline, when G20 energy ministers attempt to wrap up a binding deal on Friday.

After 10 weeks, China ended the lockdown on Wuhan, the city where the virus first emerged. Reports suggested a mass exodus from the city was likely in the near term.

Elsewhere in Asia, Japan finally declared a state of emergency after an interrupted debate in its parliament, something that paves the way for bigger economic support packages from Tokyo.

South Korea, meanwhile, unveiled economic support measures worth some $45 billion, including cheap loans for exporters. The dollar rose 0.1% against the yen and 0.5% against the won.